Does Christian anthropology have anything to contribute to the mental health sciences? And can psychology or psychiatry alone understand the phenomena that occur within the sick person? These are the questions that will be raised at the 1st European Congress of Christian Anthropology and Mental Health Sciences organised by the Universitat Abat Oliba CEU of Barcelona on 13 and 14 September, under the coordination of Mar Álvarez and Montserrat Lafuente, both psychiatrists and professors at the mentioned centre.

The congress is organised jointly with the Fernando Rielo Chair of the Pontifical University of Salamanca and with the support of the European Movement for Christian Anthropology, Psychology and Psychotherapy. It will take place at the headquarters of the U. Abat Oliba in Barcelona.

The underlying thesis is that the separation between mental health sciences and Christian anthropological reflection has led to an impoverishment of dialogue in public debate and to numerous prejudices, that is, to see Christian anthropology as repressive of personal experience and psychology as an isolated science based only on the quantifiable. That is why it is important to hold a congress like this one that seeks to integrate both disciplines and the collaboration between psychologists, psychiatrists, philosophers and theologians.

In an interview with Agencia Zenit, Mar Álvarez underlines the importance of uniting the efforts of organizations that work in these fields: “It has been necessary for several forces to come together, it has not always been possible, and we have been slow but in the end we have done it. This year three forces have come together, which have given sufficient impetus, because on the one hand there is a group of professionals closely linked to the CEU and other Spanish universities who see it as a necessity and there is a commitment; this also joins the work of EMCAPP, the European Movement for Christian Anthropology Psychology and Psychotherapy, a movement of Christian psychologists and therapists who have been working in Europe for many years and who have had their little encounters and who ask us to be able to do it together; and at the same time we can count on their network of contacts. This would be the second force. And the third force is the Fernando Rielo Chair of the Pontifical University of Salamanca, which also helps us in the organization of this event.

The congress will be attended by outstanding professors such as Dr. Paul Vitz, Emeritus Professor of Psychology at New York University and Divine Mercy University of Virginia; Sarah Lane of Edinburgh, Martín Echavarría, Michael S. Serwin, Werner May or Juan José Pérez Soba of the Pontifical University of the Holy Cross in Rome.

It is an effort to deepen the holistic vision of psychology and health sciences, at the service of the human being who is a child of God and for whom the somatic has repercussions in the spirit. The Congress aims to be an important contribution, at European level and beyond, to the integral vision of the human person, who is spirit incarnate.

Registration is online at the following link ➡️: https://bit.ly/2keNwsF

Further information is contained in the programme published below: 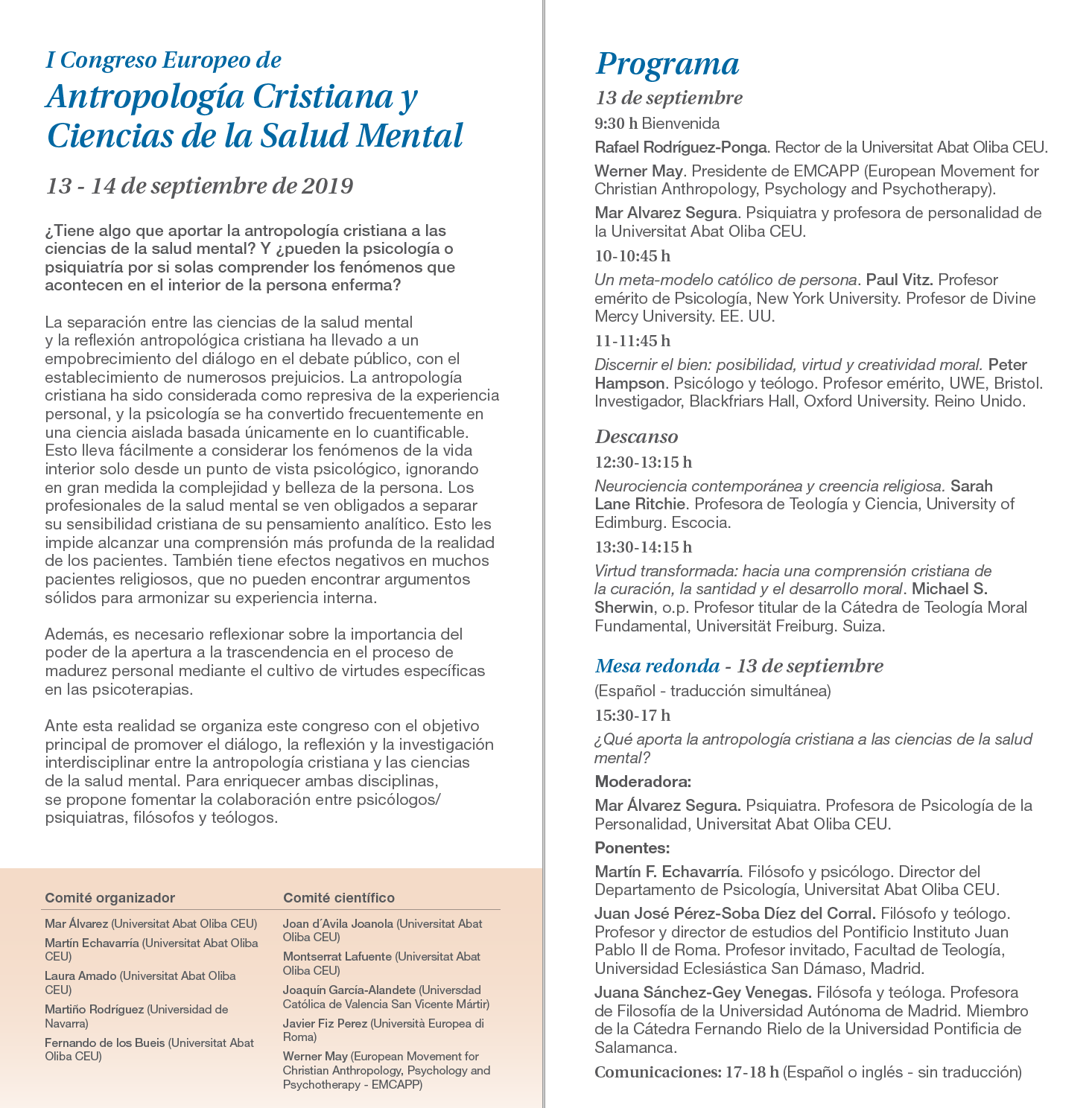 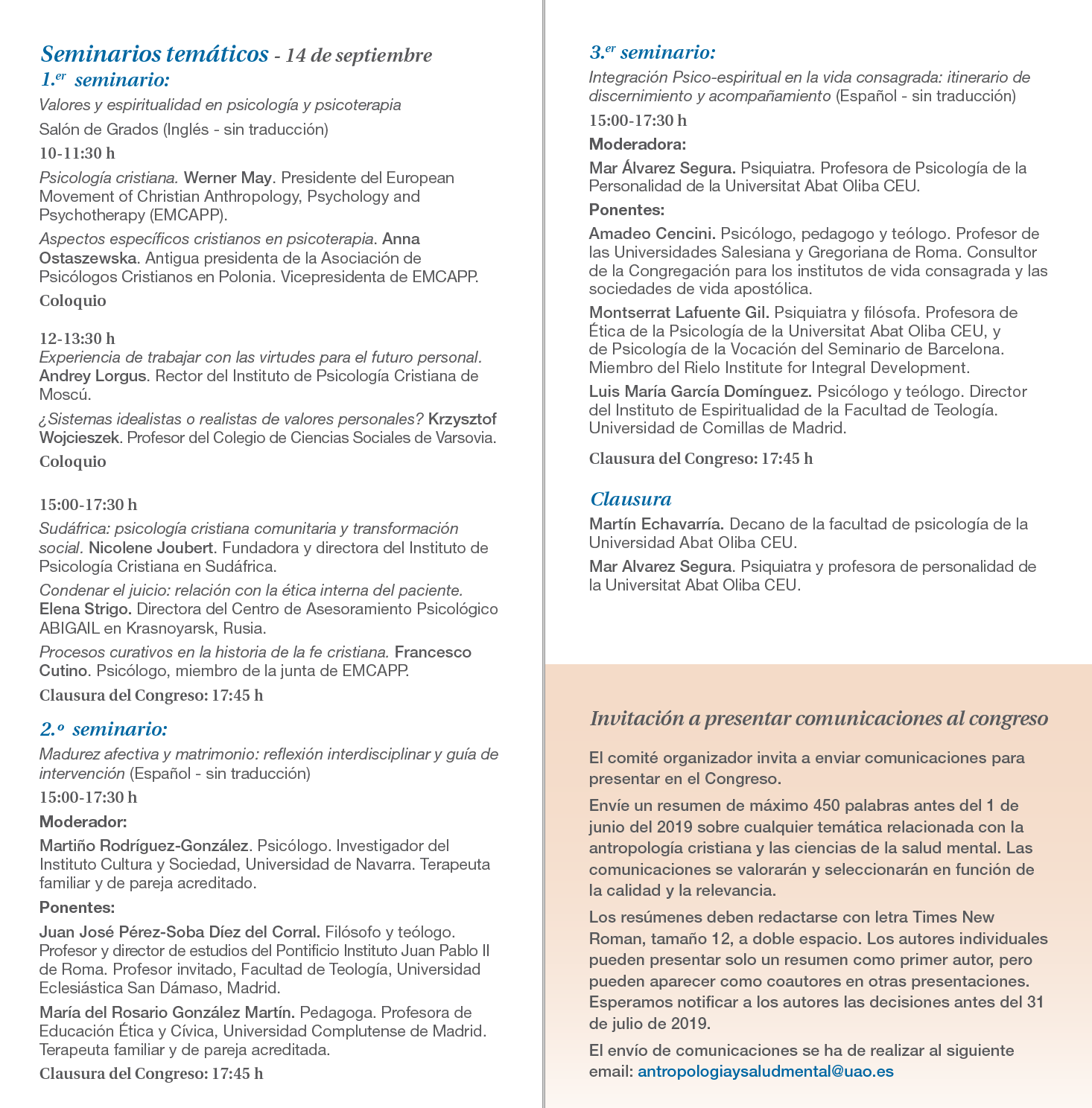