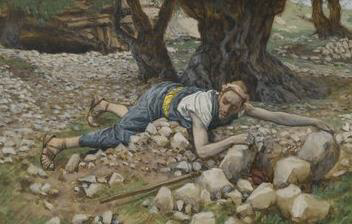 by f. Luis CASASUS, General Superior of the men’s branch of the Idente Missionaries

In the 2001 movie Amélie, a young woman finds a small tin box full of childhood treasures behind a loose tile in the wall of her rented apartment. A little detective work leads her to a man who lived in the apartment as a child forty years earlier, and she places the box where
she knows he will find it. Upon opening the box and seeing its contents, the man is overwhelmed with nostalgia as he relives his entire childhood in a moment.

Brooklyn Museum
A child has his treasures. Adults, no doubt, too. The image of finding a treasure conveys a message: you have to choose between things of little value and the real treasure. Sometimes that choice is not so easy, for our hearts are divided. Today, Jesus tells us that
this treasure is the kingdom of heaven. He describes the kingdom of heaven with many images, depending on what he wants to highlight in each moment, for that kingdom is the only reality that truly exists, beyond the illusions of this world, the passing beauty, the momentary joy that we can experience in many ways.

In the first two parables of today, He compares this kingdom to a treasure and a pearl, two really valuable things, because the kingdom of heaven also represents something that every human being esteems more than any object or activity: enjoying the best possible company. At the same time, this is the answer to what human beings fear most: loneliness, separation, isolation.

The one who possesses the divine wisdom, which is not of this world, really becomes a light for people who are not closed in on themselves. This happened to Solomon when he was visited by the Queen of Sheba: Blessed be Yahweh your God, who has looked kindly on you and has put you on the throne of Israel, he has made you king so that you may dispense justice and righteousness (1 Kings 10:8-9).


the sense that I can talk to Him whenever I want, just as Jesus did. Father, I thank you for hearing my prayer. I myself knew that you hear me always (Jn 11: 41-42).

How do we get to that kingdom?

The first problem is, of course, that some very worthless things can dazzle us.

In the First Reading, Solomon asks God for the gift of being able to distinguish right from wrong. The Lord’s response is one of satisfaction to this request, for it is something we cannot achieve with our own strength, with our experience or with our good will.

What can compete in our hearts with the kingdom of heaven? Not just some occasional temptation, but something that becomes our idol.

For us who live in modern civilizations, it is not always easy to understand the power of idolatry. But there are idols for society and idols for each of us. For example, science and technology can become idols in our culture, claiming to explain everything and provide
the solution to any material, emotional and spiritual problem of man.

But even more dangerous are our personal idols, which are invisible and which we build up little by little, as happened to Israel when it began serving the foreign gods, for example with the worship of Baal, a pagan deity, which involved sex rituals, contaminating the purity of the faith of Israel.

The problem with idolatry is that we resemble and finally become what we revere. A seemingly superficial example is when a young man says that some singing star “is his idol”. Not only does he repeat his songs, but most likely his way of dressing, combing his hair, talking, treating others, no matter how vulgar or negative. But this happens to cultivated, intelligent people who end up worshipping their own ideas. That was the case with the influential philosopher Friedrich Nietzsche (1844-1900), who said:

The noble type of person feels that he determines value, he does not need anyone’s approval, he judges that “What is harmful to me is harmful in itself,” he knows that he is the one who gives honor to things in the first place, he creates values. He honors everything he sees in himself: this sort of morality is self-glorifying (Beyond Good and Evil: Prelude to a Philosophy of the Future).

This is the description of an idolatrous race who makes idols of themselves. It was no surprise that Nietzsche ended up falling into the grips of serious mental illness.

Another facet of this idolatry of the self is expressed in the exaggerated attention to of “self-image” and “self-esteem. Self-esteem is sometimes understood as “a confidence and satisfaction only in oneself”. This is sometimes used in the context of psychology and counseling, where people’s problems are traced ultimately to a poor self-image, and in the context of education, where students’ poor academic performances are too often viewed to be a result of the students’ low self-esteem.

We can mention many examples of the modern individualism that invades us, as one more form of selfishness and pride that permanently corrupts the human being.

When we commit ourselves to amplifying our own ego, then that ego becomes inflated. We become more and more the selfish ego that we are worshiping by making that ego appear more and more important through the attachment to our judgments (right or wrong) and desires (good or ultimate meaning or satisfaction, and will inevitably be deflated. bad). However, this is an artificial expansion, which can bring no But there is a good self-love that seeks what will truly make us happy; it is loving ourselves by desiring to become what God wants us to become. Actually, it cannot be called “self-love”. To love your neighbor as yourself (Lk 10:27) does not include a command to love yourself, but it assumes that the fact that all people want what is best for their existence, is the presupposition for loving others, i.e., we should want what is best for others, just as we want what is best for ourselves.

The bottom line of this problem is that the human being really needs to worship something or someone. And as a consequence, even if he/she is unaware of it, he/she becomes a reflection of that something or someone. God has made humans to reflect him, but if they do not commit themselves to Him, they will not reflect Him but something else in creation.

This is why we read today in the Second Reading: For those he foreknew he also predestined to be conformed to the image of his Son, so that he might be the firstborn among many brothers. At the core of our beings we are imaging creatures. It is not possible to be neutral on this issue: we either reflect the Creator or something in creation. It is the responsibility of yesterday’s and today’s apostles to harness this power, just as it was the responsibility of the prophets of the Old Testament. That is a beautiful way to describe our vocation.

Even Confucius said that freedom comes from being faithful to our vocation, not the praises or criticisms of men. Only then are we truly free.

Another difficulty is that, strange as it may seem, we can get tired of the treasure and exchange it for any trinket. That fatigue is not momentary or circumstantial. It is a deep tiredness, linked to the fear of the effort that awaits us in the future.

We all remember the story of Esau and Jacob, how he gave up his firstborn rights, apparently for a plate of food, because he was hungry at the end of his t the end of his wanderings far from home. But the matter is more complicated.

Esau returned from the fields after having committed several capital crimes. He found his brother Jacob cooking lentils, a dish served to mourners. Esau rejected his birthright, not for a plate of lentils, but because he did not want the suffering he knew would go along with it.

That is why there are so many ruptures in marriages and in the life of religious. How often, in times of difficulty and when the weight of our vocation is overwhelming, we feel like quitting, especially when the going gets tough. This is particularly so when we are
misunderstood, wrongly accused and treated unjustly. Surely, many times in our lives, when we are going through a rough patch with our spouse or loved ones, don’t we instinctively want to give up? Isn’t this what the purification of the senses and the spirit is all about?

Taking the easy way out will not give us happiness. It is equivalent to being unfaithful to yourself, not only to God. Remember the Lion King movie, how Simba was trying to escape from his identity and his calling to be the King. Only by accepting his calling and being true to the will of God, could he find himself.

It is important to understand the threat posed by the third parable, of the “good and bad” fish. The dramatic language is meant to be understood by the Jews, but the significance of the warning should not be underestimated, nor is there any contradiction with divine mercy of God who “does not want anyone to perish, but that all may come to conversion (2 Pe 3:9).

This Parable is intended to highlight the importance of the present time and the urgency of the decisions to take today. Every moment wasted is definitively lost and mistakes done in this world will have eternal consequences. The possibility of dissipating, squandering one’s own existence focusing it on wrong treasures is anything but remote. Only the good will enter heaven, all the negativity will be annihilated first… by the fire of God’s love.

Entering the kingdom of heaven is a true and arduous conquest, something we do day by day with grace. Whoever is patient with his poverty, even if not becoming rich, conquers a kingdom (Fernando Rielo. Transfigurations).

Let us end with an observation and advice from Pope Francis, where he reminds us that receiving the kingdom of heaven is not something that happens only once in a lifetime, but rather represents the continuous and complete way of relating to God -in purification and in union- every day:

I invite all Christians, everywhere, at this very moment, to a renewed personal encounter with Jesus Christ, or at least an openness to letting him encounter them; I ask all of you to do this unfailingly each day. No one should think that this invitation is not meant for him or her, since ‘no one is excluded from the joy brought by the Lord’ (Evangelii Gaudium 3).