What can trigger our conversion? 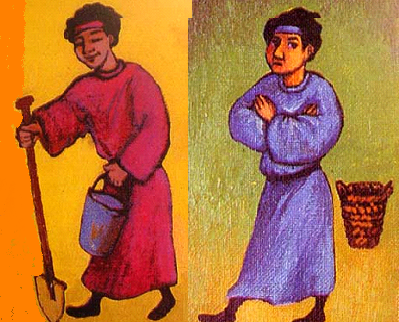 by f. Luis CASASUS, General Superior of the Idente Missionaries

The Gospel scene we read today represents a brilliant intervention of Christ as a Master. He tells a parable from which the listeners can draw an immediate conclusion… and then applies it to those same listeners, who were reluctant to see in their own lives the attitude of the second son, the one who did not fulfill his father’s will.

In this provocative parable, we see first of all that all are called by God, moreover they are called as sons. Secondly, Christ wants to show the weakness of our decisions and the fleeting nature of our good intentions. Finally, in his words it is reflected that all, prostitutes, tax collectors, religious people and people of good standing (elders of the people) will somehow enter the kingdom of heaven.

Our society appreciates those who are productive. The old, the sick, the disabled are respected and perhaps helped, but are often felt as a burden. The perception of their value and the preciousness of their contribution to making our world more humane is not immediate. We reward the efficient and the capable. We esteem those who are able to succeed by themselves and we remunerate those who work. God instead starts from the last, is interested of the last, privileges and rewards the last. That is why first he calls the son who was not the favorite, who did not show true respect and affection to his father. Surely the father expected that refusal…and even more so his later repentance.

Certainly, God the Father knows that our repentance and conversion is always possible and prepares the way for it to happen.

Jesus leaves today’s parable open for us to speculate and ponder on the first son’s change of heart.

We change deeply (not temporarily or superficially) always through someone else. First, it may be because we realize the damage we have done. This is the case of some alcoholics who have abused their family and somehow finally find a way to come to a healing.

Secondly, we may identify with someone because we see them as similar to us and at the same time living a very different life from ours. He may be a hero, a child in his innocence… or Christ himself. Finally, we change in a genuine way when we feel sincerely loved, welcomed and forgiven.

In reality, the person of Christ fully meets all three of these characteristics. Sometimes the Holy Spirit takes advantage of violent or painful events to bring about our conversion. But it is always to make us capable of doing good to others. Prophet Jonah’s experience is a case in point. Sometimes we need something startling or disconcerting to jolt us out of our indifference, impassiveness, doubts or lack of commitment to God. I remember a friend who was working with groups of patients who had cancer. He heard more than one person say: What a pity it is that we had to wait until now, until we were riddled with cancer, to learn how to live.

Why did the second son abandon the task that the father had entrusted to him? I would dare to say that for the same reason that many religious abandon their vocation, which many times was embraced with enthusiasm: In reality, they never cared for anyone. They did not live out their fatherhood/motherhood. They were limited to being hardworking, or nice, or very studious. Human beings are experts at inventing excuses. Individuals with particular motives invoke specific profiles of justification mechanisms used to justify or rationalize behavior. For instance, individuals who are dispositionally aggressive are likely to view the world as hostile because they believe that others have intentions to harm them.

But there is something deeper than the excuses we construct. The reality is that, if we have no one to give our lives for, we are open to any temptation or passion. Our soul continues to be divided between God and the world. And in that dilemma, even if we do not formally say “No” to Christ, the world eventually wins.

The first child embraces his task in the vineyard just as a father/mother goes to work at something he does not like because he has to support his family. We can only truly be changed, in depth, because of someone else. In many moments we will not understand that person, but that is not the essential thing. Nor is it that we agree on all things. That explains why Jesus told the Apostles that there were things they could not understand now…but that did not lead to them being expelled or belittled.

The sincere selflessness of our dedication, the authenticity of that relationship is the absolute core of what can change people in soul and spirit. It is not the explanations that we give, it is actually something about an intense shared moment with someone else. A mother, a father, a disciple missionary, a teacher…or a psychotherapist.

Sincerity on both sides is essential. Generous souls do not need to demonstrate their capacities at every moment. They know how to show themselves as they are, and this facilitates communication and trust:

A young woman wanted to go to college, but her heart sank when she read the question on the application blank that asked, “Are you a leader?” Being both honest and conscientious, she wrote, “No,” and returned the application, expecting the worst. To her surprise, she received this letter from the college: “Dear Applicant: A study of the application forms reveals that this year our college will have 1452 new leaders. We are accepting you because we feel it is imperative that they have at least one follower.”

We could evoke here what is asked of a witness in a trial: to tell the truth, the whole truth and nothing but the truth. In other words, a confession of our life.

If sincerity is openness and truth in our discourse, even more important is the openness of our heart, which is nothing other than authentic obedience. In the parable, the father’s words enlighten the first son, although it takes a while for him to incorporate them into his life plan. This is the process that in prayer is called “Intellectual Acceptance of the Gospel,” which is followed by that incorporation or implementation of what is the “Spirit of the Gospel. This is the genesis of evangelical (not worldly) obedience.

The virtue of obedience has a bad name these days. Some people think that to be obedient means to be a mindless slave and to accept being treated as a child. Household cats seem to be of this opinion as well. As one observer put it, “Your cat will never really obey you: Sometimes he will just agree with you.” But that is not the Gospel virtue of obedience either.

Obedience is difficult for us for several reasons. First, because I judge that certain matters are not important, crucial or urgent. Second, because my pride convinces me that my point of view is more appropriate and practical. Even if this were partly the case, the tragedy of the disobedient is the grace he has lost: a distance has been created between the disobedient and God, between him and his neighbor.

The desire to control affairs, to be in a position to manage others, to make one’s own will prevail, often comes from that form of pride which has one of the deepest of roots: the love of one’s own judgments and desires. Even when we yield externally we are still convinced in our heart that we knew best. But let us be quite clear about it, we cannot improve on God’s plans.

Paul was proud of the community of Philippi. However, someone was trying to attract attention to oneself and impose his will on others. This prompted Paul to make a heartfelt recommendation in the first part of the Letter:

Complete my joy by being of the same mind, with the same love, united in heart, thinking one thing. Do nothing out of selfishness or out of vainglory; rather, … each looking out not for his own interests, but (also) everyone for those of others.

Any call from God involves cost. It demands an investment of time and energy, and realigns relationships, sometimes in painful ways. In this sense, a call that is heard and answered needs to be reaffirmed when its consequences and its cost become evident. When Mary experienced Joseph’s misunderstanding, she experienced the price of her call. Her initial words of acceptance, let it be to me according to your word, needed to be repeated. Obedience requires not only undertaking demanding activities, but sooner or later, the denial of oneself, for he who shall save his life shall lose it, and he that shall lose his life for my sake shall find it (Mt 16:25).

Obedience involves a constant listening and pondering of the voice of the Holy Spirit. It is also the continuous and heartfelt repetition of the Mary’s prayer: May it be done according to your will. Only when the two come together will obedience become a source of true freedom, looking beyond what pleases the opinion of the moment, the image of performance that we want to convey and the appeal of labels.

If we want to live a life of obedience to God, we shouldn’t look to either the first or the second son in this parable. Instead, we should look to no other son but the perfect Son, Jesus Christ, fully recognizing that he has lived the righteous life that we have not. The way we enter God’s kingdom it is only through repentance and faith in the perfect Son, the Son of God.

Pope St. John Paul II summed up the importance of Mary’s example of obedience in his General Audience address of Sept. 18, 1996:

By her conduct, Mary reminds us each of our serious responsibility to accept God’s plan for our lives. In total obedience to the saving will of God expressed in the angel [Gabriel’s] words, she became a model for those whom the Lord proclaims blessed, because they hear the word of God and keep it (Lk 11:28). In answering the woman in the crowd who proclaimed his Mother blessed, Jesus disclosed the true reason for Mary’s blessedness: her adherence to God’s will, which led her to accept the divine motherhood. In the Encyclical Redemptoris Mater I pointed out that the new spiritual motherhood of which Jesus spoke is primarily concerned with her. Indeed, is not Mary the first of ‘those who hear the Word of God and do it’?

The sinners and tax collectors realized their lives were meaningless and they received respect from Jesus which they did not receive from any of their contemporaries. In Jesus they found life as it was meant to be. Jesus offered them a hope they never before had. When they converted the words of God to the prophet Ezekiel in our First Reading were fulfilled:

…if a wicked man, turning from the wickedness he has committed, does what is right and just, he shall preserve his life; since he has turned away from all the sins which he committed, he shall surely live, he shall not die.

On the contrary, if you and I are unaware of our sin, especially lost opportunities to live charity, we must recognize that we are much like the second son.