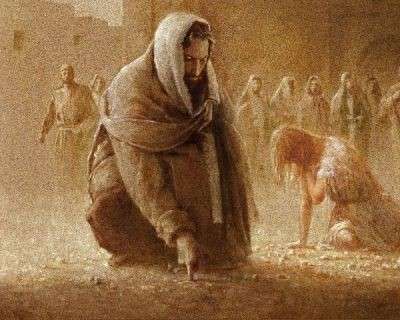 In his book Jesus of Nazareth, Pope Benedict XVI reminds us that when the Mother Mary had become pregnant, Joseph faced a difficult choice. The law required that if a betrothed woman was unfaithful, the engagement should be cancelled.

St. Joseph was a just man, who wanted to follow the law faithfully, and to follow it in love. Pope Benedict XVI explains that Joseph’s task was to interpret and follow the law faithfully, to decide whether to bring Mary to court, where her pregnancy would be exposed, or to quietly end the betrothal. St. Joseph knew that if Mary’s pregnancy had been exposed, she would have been outcast, shamed, and would have carried in their community the stigma of adultery.

Pope Benedict says that Joseph made a choice to love: He does not want to give Mary up to public shame. He wishes her well, even in the hour of his great disappointment… He lives the law as Gospel. He seeks the path that brings law and love into a unity.

For that reason, St. Joseph, following the law, decided to end his engagement quietly, rather than put her to shame. Before Christ indicated it, Joseph was faithful to the new justice, the one that does not despise the Law and the Prophets, but brings them to perfection. And in that way he was able to have a dialogue and an intimate relationship with God, who would tell him what he should do. He really lived out what the First Reading tells us today: If you choose you can keep the commandments, they will save you; if you trust in God, you too shall live. Even the Law of the Jews is not just code of law as we know it today, but a love story between Israel and her God.

Jack took a long look at his speedometer before slowing down: 78 mph in a 55 zone. When his car had slowed a bit, the police officer was stepping out of his car, the big pad in hand.

Was that Bob? Bob from Church? This was worse than the coming ticket. A Christian cop catching a guy from his own church. Jumping out of the car, he approached a man he saw every Sunday, a man he’d never seen in uniform.

–Hello, Jack. No smile. Guess you caught me red-handed in a rush to see my wife and kids.

–What was my speed?

–Seventy. Would you sit back in your car please?

Confused, Jack hunched himself through the still-open door. Slamming it shut, he was in no rush to open the window. Bob scribbled away on the pad. A tap on the door jerked his head to the left. There was Bob, a folded paper in hand. Jack rolled down the window a mere two inches, just enough room for Bob to pass him the ticket.

–Thanks. Bob returned to his police car without a word.

Jack watched his retreat in the mirror. Jack unfolded the sheet of paper. How much was this one going to cost? Wait a minute. What was this? Jack began to read:

Dear Jack, once upon a time I had a daughter. She was six when killed by a car. You guessed it, a speeding driver. A fine and three months in jail, and the man was free. Free to hug his daughters. All three of them. I only had one, and I’m going to have to wait until heaven before I can ever hug her again. A thousand times I’ve tried to forgive that man. A thousand times I thought I had. Maybe I did, but I need to do it again. Even now. Pray for me. And be careful. My son is all I have left. “Bob”

Jack turned around in time to see Bob’s car pull away and head down the road. Jack watched until it disappeared. A full 15 minutes later, he, too, pulled away and drove slowly home, praying for forgiveness and hugging a surprised wife and kids when he arrived.

Perhaps the above story reminds us of something that our Father and Founder practiced and repeated throughout his life, that the authentic love of the disciple of Christ for his neighbors is one of genuine fatherhood, or motherhood. This is the Law and the wisdom of the apostle, not a wisdom of this age, nor of the rulers of this age who are passing away (2nd Reading).

And this is the meaning of giving life. It is not necessary to be an educated individual, a believer, or a good person to understand that a mother gives life. And a true teacher, a genuine apostle, gives life, his or her life. Our task today, meditating on the Readings of the day, is to discover what it means in our personal case to love by giving life, true life.

When Christ tells us today He does not come to abolish the law or the prophets, not to abolish but to fulfill, He is teaching us that the commandments go beyond external acts and that their ultimate goal is unity with our neighbor and with God. That is why, in today’s Gospel, we see four forms of separation and union that are contemplated by Jesus with new eyes: killing, adultery, divorce and the promise or oath. And it is a revolutionary revelation to say that the perfect relationship with one’s neighbor is nothing less than giving him life.

If giving life means putting into activity everything that exists in a human being, in our neighbor, then we understand that this requires time, a lot of time, and abandonment of many activities and comforts that attract us and to which we are accustomed. This happens to a mother who gives birth, to a teacher who strives for his disciples and to an apostle who puts the souls entrusted to him in God’s hands, day and night.

But, if we do it united to Christ and in his name, giving life is a true resurrection, for the result is a new life, a person who begins to spread his wings by opening up to others, by leaving his little world. Being able to give life is the infinite level of contentment and a worthy life. Is not life more than food, and the body more than clothing? (Mt 6: 25)

The ways of God are opposite to the ways of the world. He who loses his life, as Jesus said, will find it. John the Baptist’s statement that ‘I must decrease so that He can increase’ is one that applies to all. The story of Lazarus, where physical life comes through physical death, is a picture of how spiritual life also comes through a death, a death of self as we lay down our good or bad habits to live this Christian life.

In the last World War, the one of two brothers fighting in the same company, fell in battle. The one who escaped asked permission of his officer to go and bring his brother in. He is probably dead, said the officer, and there is no use in risking your life to bring in his body. But after further pleading the officer consented. Just as the soldier reached the lines with his brother on his shoulders, the wounded man died. There, you see, replied the officer, you have risked your life for nothing. Tom replied: No. I did what he expected of me and I have my reward. When I crept up to him, and took him in my arms, he said, “Tom, I knew you would come. I just felt sure you would come.”

It does not matter what is the vital, moral, psychological or spiritual moment of our neighbor. If we really give him our life in some way, leaving behind our comfort and our plans, we will make him really happy, because he will feel God’s presence, which is the deepest need of believers and non-believers alike. Sooner or later, he will think: If that is how this human being loves, how much greater is the love of God.

The Eucharist serves as a model for us. Jesus gives Himself totally, completely and selflessly unto death. For us, this translates into valuing the person as God created him or her, and giving one’s self to the other. And as we see in the Old Testament, the capacity to give life is God’s very first blessing on the man and woman He made in His image: Be fruitful and multiply (Gen 1:29).

Christ refers today to one of the supreme ways of giving life and relating to others: forgiveness. He teaches that the commandment that orders not to kill goes well beyond the physical assault. One who uses offensive words, gets angry, nourishes sentiments of hatred has already killed one’s brother.

The rabbis taught that the most important Jewish prayer (Shema Israel) once started, could no longer be interrupted for any reason, even if a snake twisted itself around the leg of the praying person. Jesus says that in order to reconcile with the brother/sister, one even has to stop in the middle, not only of the Shema Israel but even the offering of sacrifice in the temple. After recalling the need of reconciliation, Jesus emphasizes its urgency. It cannot be delayed, it is vital.

David Leininger told the story of an elderly woman, a shy and sensitive lady who lived to be a hundred-year-old. When she was a young girl, about ten years old or so, somebody told her that she had a terrible singing voice. Now, most of us, I guess, would not let that remark bother us particularly, but it did bother this lady. Ten years old is a tender age. It bothered her so much that, for the remaining 90 years of her life, she never sang another note. No one had any idea whether she had a good voice or a bad voice; she would never take the chance of letting anyone find out, and all because of one person’s careless and unfeeling insult.

In today’s Gospel, Jesus takes our thoughts to the Ten Commandments, indicating what He sees beyond them. He discusses the Decalogue as someone that displays sublime understanding of a law that should mean something more, apart from the conventional do’s and don’ts. Jesus clearly teaches us that sins are committed in the human mind if one contemplates the possibility or has the definite intention of doing wrong even if the decision is not acted on.

Ultimately, we do not fulfill the laws or the commandments out of resentment or fear but out of love. That was what St Paul reminded us when he wrote about the gifts of the Holy Spirit: If I speak in the tongues of mortals and of angels, but do not have love, I am a noisy gong or a clanging cymbal (1 Cor 13:1)