All peoples on earth will be blessed through you. 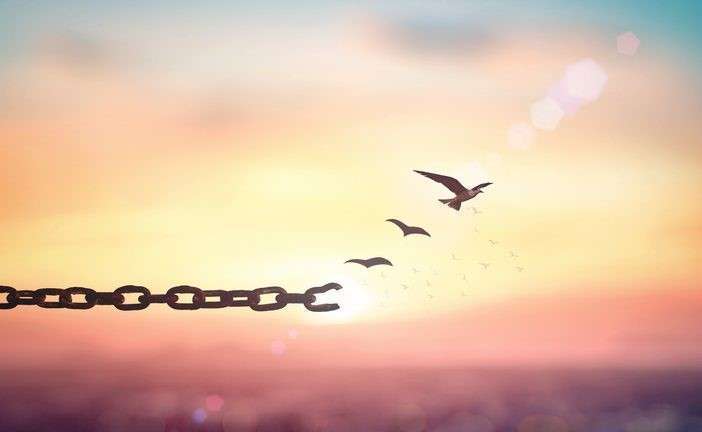 Popular (or rather, vulgar) culture has embraced the idea that people cannot change. Moreover, when faced with a choice or dilemma, the inclination is to advise “Be yourself,” due to a dominant idea of blind freedom that is based on a rather desperate and anxiety-filled individualism.

I remember, for example, a person who, when he was very young, committed a naive and minor act of homosexuality and a certain psychotherapist had advised him…to keep doing the same thing “if it was what made him happy”. Fortunately, he was a well-balanced young man and did not follow the advice.

But experience says that human beings can change. Deeply. Only one condition is needed: the openness of heart that is within our reach when we have a minimum of peace. Christ insists that he comes to bring us peace and that is what he transmitted to Peter after his denial and what allowed him to change in an unexpected, radical way; a true transfiguration. Together as individuals and as a community, we become the face of Christ in the world.

If we are followers of Jesus, then already God is at work in our life transfiguring us so that we express aspects of his radiant splendor right now. The more we obey Jesus, the more we reflect his glory. Christ’s call, his permanent vocation, is immediately linked to a transfiguration. This is how he manifested it, saying that he would make ordinary fishermen into fishers of men.

Peter’s denial and later repentance remind us that people can change, that even for the worst of sinners, forgiveness and reconciliation are possible. Judas, on the other hand, denies Jesus and then merely regrets his actions, not believing that forgiveness and repentance is possible, and so hangs himself.

Transfiguration is not just any change, but the gradual transition to what we truly are.

Mask (1985) is one of those movies that try so hard to get the message that we all hide behind a mask, one way or another, our true self. The movie is based on a true story of a 16-year-old boy named Rocky Dennis. He has a rare disease that causes his skull and the bones in his face to grow larger than they should. As a result, Rocky’s face is terribly misshapen and disfigured. His grotesque appearance causes some people to shy away from him, and others to snicker and laugh at him. Through it all, Rocky never pities himself. He feels bad about his appearance, but he accepts it as a part of life. One day Rocky and some of his friends visit an amusement park. They go into a “House of Mirrors” and begin to laugh at how distorted their bodies and faces look. Suddenly Rocky sees something that startles him. One mirror distorts his misshapen face in such a way that it appears normal – even strikingly handsome. For the first time, Rocky’s friends see him in a whole new way. They see from the outside what he is on the inside: a truly beautiful person.

During Jesus’ transfiguration, his disciples, for the first time saw from the outside what he is on the inside: the glorious, beautiful Son of God. But it is not only a matter of knowing the identity of Jesus but of being more aware of how He acts in us, of what He is doing (Motus Christi) together with the Father and the Holy Spirit. One of His most evident actions is what we call in our Mystical Examination precisely Transfigurative Union: it unites us to Him by making us more and more like Him. Our faith, similar to his; our hope, ever closer to the hope of Jesus; our charity, ever more similar to his way of loving.

The gifts are a particular resource that the Holy Spirit puts into action so that our love, our hope, our faith, our justice, in a word, our desire for love reaches a level much higher than the sky (…) The gifts of the Holy Spirit have a transfigurative mission (Our father Founder, The idente charism).

This explains that vocation, the call of Christ, is necessarily linked to our transfiguration: I need to see clearly that “I am another one”, different from the one I thought I was, in order to carry out the mission entrusted to me, which is becoming more and more apparent as the reason for my brief and modest passage through this world.

There is a change in our desires, perspectives, affections, and dreams whose origin cannot be explained as something “manufactured by us”. This transformation takes place in very different ways, sometimes with a spectacular event and sometimes as something discreet, imperceptible to others.

* St Peter was converted because of the miraculous catch of fish before and after his conversion when Jesus appeared to him after His resurrection.

* St Paul encountered the Risen Lord at Damascus and appointed by Him to be His apostle.

* Very different was the case of Narciso Yepes (1927-1977), one of the finest virtuoso classical guitarists of the twentieth century. When he was 24 years old, after a successful concert, he was leaning against the parapet of a bridge in Paris and watched the Seine flow by. He unexpectedly heard a voice inside him ask, “What are you doing?” He had been a nonbeliever for many years, perfectly content that there was no God or transcendence or afterlife. But that existential question, which he understood as God’s call, changed everything for him. He became a devout Catholic, which he remained for the rest of his life.

As our father Founder says in his Transfigurations: True prayer is recognized in that when it ceases, we are not the same.

The changes that the Holy Spirit makes in our soul have the same effect as the Transfiguration of Christ in the apostles. They remind us of the Divine power and mercy, for example when they lead us to love the enemy, the one who hurts us, in a way that cannot be explained with science or reason alone. These transformations will always give us strength in every situation in life, especially in times of trials and doubts.

One of the ideas common to all three Readings today is that whether Abraham, St. Paul or we, in our unworthiness, have been called to more than just personal transformation. Moses said to Israel: The Lord has chosen you from among all the peoples on the face of the earth to be his very own people (Dt 14:2). When God calls a person or chooses a people, He entrusts them with a task, a mission, to make them carriers of his blessings intended for all.

Abraham lived in Ur of the Chaldeans. A rich and advanced region watered by the Tigris and the Euphrates. But the territory was frequently invaded by several tribes and Abraham was probably involved in one of these forced migrations that took place at the beginning of the second millennium BC. But this patriarch was able to capture God’s will in these dramatic events: He was calling him to a great mission and he gave his trusting acceptance.

One of the most noticeable, striking and important effects of the transfiguration is the victory over fear: Jesus came up and touched them. ‘Stand up,’ he said ‘do not be afraid’. Instead of staying on the mountain, they were to follow Jesus down the mountain to face the reality, the sufferings and the struggles of life.

After being clothed through the transfiguration, with new faith, hope and charity, we are ready to go back to everyday life: the problems, conflicts, and disagreements that frighten us. We are prepared to follow Jesus, who goes up to Jerusalem to offer his life.

The voice from heaven that declared the identity of Jesus was already heard at baptism: This is my beloved Son. Now an exhortation is added: Listen to him. Both in the Old and the New Testament, the word “to listen” does not just mean “to hear” but rather it suggests “to obey” (Ex 6:12; Mt 18:15-16). The recommendation that the Father gives to all the disciples is to put into practice that what Jesus teaches.

This attitude of listening, docility, and availability in the lives of Abraham, Timothy and later James, Peter and John, produced in their lives true ecstatic behaviors, gestures of going beyond their customs, their character and their tastes. Real signs of the divine presence in them.

Peter was the head of the twelve apostles. His responsibilities were so heavy and he even experienced crises in his life. He was crucified like our Lord but upside down. But he held on to his faith and to the Lord until his death. James was the first among the eleven apostles who died as martyrs. John died in his old age and, for sure, he experienced difficulties in his life as a follower of Christ because of persecution.  But they were able to persevere as faithful servants until the end because his transfiguration experiences, which began especially on Mount Tabor and enabled them to change their hearts and gave them enough courage, hope, and strength.

And when everything is subject to Him, then the Son Himself will also be subject to Him who subjected everything to Him, so that God may be all in all (1Cor 15: 28). Now, this ultimate reality must begin in us who have received the call to sonship, filiation, although we have this treasure in earthen vessels, that the excellency may be of the power of God and not of us (2 Cor 4:7). We continuously have moments of transfiguration in our lives and become fully aware of the work of the Holy Spirit, when we awake from sleep, from our routine and gradually wake up to his active presence.

Eucharist is one of the most profound moments of transfiguration in our lives and so often we see it not. We believe that ordinary bread and wine are transformed into the Body and Blood of Christ. Do we dare grasp what happens to each of us in the Eucharist?

We bring our gifts to the altar. Yet they are a symbol, it is we ourselves we bring to God in that ordinary bread and wine. And in the epiclesis (the prayer calling down the Holy Spirit, the overshadowing) the celebrant prays for the bread and wine to be transformed into the Body and Blood of Christ. In the words of the Eucharistic prayer, we say Lord we pray that in your goodness and mercy your Holy Spirit may descend upon us and upon these gifts, sanctifying them and showing them to be holy gifts…

Upon us as well as the bread and wine…what a miracle.