The two dimensions of gratitude 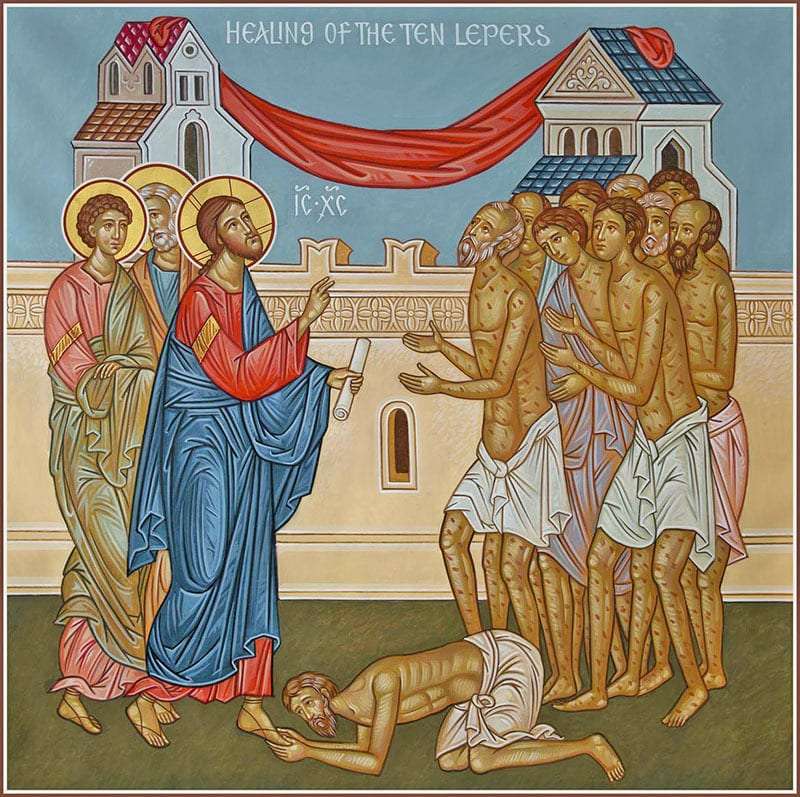 In what sense is gratitude the first virtue? We can make this claim because before we get a chance to do anything for other people, we receive care, attention and affection, even though not all of us to the same extent.

But gratitude never came easily to us human beings, Were not all ten made clean? The other nine, where are they? Moreover, it is a diminishing virtue in modern times. Gratitude competes with our pride, self-reliance and sense of accomplishment we have. Mark Twain expressed this in a humorous way: If you pick up a dog and make him prosperous he will not bite you. This is the principle difference between a dog and a man.

When we find thanksgiving difficult, it is often because we don’t want to acknowledge that the gifts we possess are not solely ours; they come from the example and offerings of others, are rooted in the heart of God, and must be offered, in turn, to others. We want to think what we have is the result of our efforts rather than the gifts, good turns and opportunities provided us by others. In our consumerist society, we focus on what we lack, or what other people have that we don’t, whereas elementary gratitude is the feeling of appreciation for what we already have.

A little boy fell off a pier into deep ocean water. An older sailor, heedless of the great danger to himself, dove into the stormy water, struggled with the boy, and finally, exhausted, brought him to safety. Two days later the boy’s mother came with him to the same pier, seeking the sailor who rescued her son. Finding him, she asked, “You dove into the ocean to bring my boy out?” “I did,” he replied. The mother quickly demanded, “Then where’s his hat?”

Gratitude is an attitude expressing appreciation for what one has as opposed to a consumer-driven emphasis on what one wants or thinks we need. Gratitude is not a technique or a stratagem, but a refined moral disposition. It was poetically defined by Jean Massieu, the pioneering French deaf educator, as the memory of the heart.

Gradually, we can attain a state of continuous praise and thanksgiving of our hearts, in all kinds of situations and circumstances.

Even in the midst of the many trials and sorrows that every person faces, being attentive to the we become grateful to God and to many people who had, or have today a positive impact in our lives. Writer Oliver Sacks, who suffered from pancreatic cancer said that having gratitude was responsible for keeping him alive. Even though he knew his life was coming to an end, he was grateful for the opportunity to look back and see his last days in the context of his entire life with a deep sense of connection. He confessed that, while he was afraid of dying, his predominant emotion at the end of his life was gratitude. He was able to do all the things he wanted to do before his transition such as deepen his friendships or say goodbye to loved ones.

When Paul writes the second letter to Timothy, he is in prison, in Rome. Many friends abandoned him or were lined up against him (2 Tim 4:9-15). The pagans considered him an evildoer and the Jews a traitor. But the thought that Christ also passed through the same sufferings and misunderstandings before entering into the Father’s glory was not only a consolation for him, but also that triggered his joy and gratitude: If we have died with him, we shall also live with him. If we endure with him, we shall reign with him (…)The Word of God is not chained.

Grateful people are always contented people. They focus on what they have, not what they have not got. Ingrates always look at what they do not have and envy others who have them.

But the message of the today’s Gospel is not just a lesson of good manners, to remember to say thank you to those who help us. The Samaritan leper is more than a model of gratitude. We do not create gratitude, rather we welcome it as a new gift, a new way of contemplating our relationship with the divine persons and with our fellowmen.

Gratitude is more than a virtue. It is also a mystical experience, usually reflected in our Mystical Recollection and Quietude. We see just how amazing the gift of gratitude is when we consider the unlikely circumstances and places in which we find people practicing it. It is truly supernatural. Jesus, in episode of the loaves and fishes feeding 5,000, gives thanks for the few loaves and fishes that He does have. He is facing overwhelming need, with severely inadequate resources… and yet He is giving thanks. Again, He gives thanks before partaking the Last Supper. Knowing that this bread and wine symbolize the excruciating death He will soon die on the cross, Jesus nonetheless thanks our heavenly Father for it.

Gratitude opens up a bigger and better perspective, shifting our focus from what we lack or strive for to what we already have, to all that we have been given, particularly forgiveness, which is the permanent gift we receive from God. By turning us to the outside, gratitude constitutes a manifestation of our ecstatic nature, enabling us to live not merely for ourselves but for God and our brothers. Certainly, gratitude for the past… leads to trust for the future.

In fact, gratitude is the first movement of the spiritual life that recognizes God as the Creator of all things, believes in Jesus as God’s Son and sacrifice for the sins of all people, and reflects life in Christ by the power of the Holy Spirit.

The Samaritan leper acknowledged that God is the source of all that we have. We cannot properly praise God unless we also bring with us conscious, grateful words of praise to His name, for all He has done, including giving us a heart to thank Him in the first place.

All the ten lepers they were cured of their leprosy. But perhaps they attributed it to the Jesus or to other reasons. Even the healing that Jesus effected was not clear; Jesus simply instructed them to show themselves to the priests. In their joy, they only thought of the fact that they were healed. They would have gone to the priests and then back home to celebrate. Along the way, all ten were aware that Jesus was a healer. Until here, all the ten arrived.

But a new light brightened in the mind and heart of the Samaritan: he understood that Jesus was more than a healer. In his act of salvation, the leper captured the message of God. He, the heretic who did not believe in the prophets, had surprisingly intuited that God has sent him, whom the prophets announced: Blind people are now able to see, and the lame can walk. People who have leprosy are being healed, and the deaf can now hear. The dead are raised to life, and the poor are hearing the good news (Lk 7:22).

It is easy to assume that the other nine lepers returned later to offer thanks. They first went to the priests to comply with the formalities and to be re-admitted to the community life. Then they ran back to their families and surely returned to Jesus. And why did Jesus lament?

He is not saddened because he verified a lack of gratitude. It says that only the Samaritan gave glory to God, that is, the only one who understood immediately that the salvation of God comes to people through Christ. He is the only one who acknowledged not only the good received, but also the intermediary chosen by God to communicate his gifts. He desired to proclaim it before all, his gratitude and discovery. The others were not bad, only that they were not immediately aware of the novelty. They continued to follow the traditional way: they thought that one arrived to God through ancient religious practices, through the priests of the temple.

A wide assortment of distractions can blur our view, like hectic schedules and the multiple hats we wear, the stresses of the present, the worries of the future, and the fatigue that can come along for the ride…and we end up being ungrateful. Jesus warned us, Woe to you, Chorazin! woe to you, Beth-saida! for if the mighty works done in you had been done in Tyre and Sidon, they would have repented long ago, sitting in sackcloth and ashes. But it shall be more tolerable in the judgment for Tyre and Sidon than for you (Lk 10: 13-14).

We have an ungrateful heart due to our pride and self-reliance. Naaman was the chief commander of Syrian army. God gave him victory over his enemies but he did not acknowledge that his success was the work of the Lord. Instead, he glorified himself until he was struck down by the most dreaded disease in those days, namely, leprosy.

This is true for us today. We are ignorant of God’s divine intervention and mercy for us. Hence even when we are cured of our sicknesses, we are not saved. This is because our hearts are still full of ourselves and lacking in gratitude and humility to share the life of God. We may be physically healthy but emotionally and spiritually empty. However, the man who came back to thank the Lord was healed body, soul and spirit. That is why the Lord said to him: Stand up and go on your way. Your faith has saved you.

Practicing gratitude means paying attention to what we are thankful for to the degree of becoming more kind and compassionate toward the God and our fellowmen. It really motivates us to make deep and visible changes in our lives. Of course, we all know it’s good to be grateful. But, we may not realize what a gift it is for others to know how grateful we are for them. One word or action that communicates how much a loved one means to you is a powerful testimony and a component of the virtue of honor.

Gratitude is a very practical and unitive virtue: we really demonstrate our gratitude when we immediately make effective use of the truth we understand and the peace we receive, by sharing them with our neighbor.

We must remember that the Second Vatican Council called the Eucharist the center and the summit of the Christian life. Eucharist is a term which derives from ‘eucharistia’, Greek for ‘thanksgiving’. More than a mere feeling, Christian gratitude is a virtue, or disposition of the soul, that shapes our thoughts, feelings, and actions, and that is developed, refined, and exercised through a remembered relationship with God and His creation. We can safely say that gratitude and thanksgiving are not a favor we do for God; they are a favor to us from God.

The Devil sought to tempt Jesus to use His divine power for Himself, by changing the stone into bread when He was hungry and to jump from the pinnacle of the Temple to prove His divinity. But Jesus used scriptures to resist the devil’s temptations. We too must resist such temptations by remembering what Jesus said: Whoever wishes to be great among you must be your servant, and whoever wishes to be first among you must be your slave; just as the Son of Man came not to be served but to serve, and to give his life a ransom for many (Mt 20: 26-28).