No one has hired us 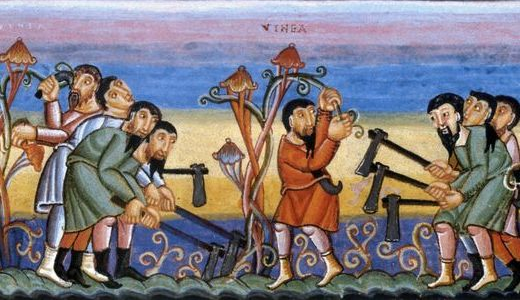 The Beatitudes can help us understand what today’s Gospel says, since both texts speak of the nature of divine mercy and justice.

Certainly, it is difficult for many people to understand God’s love and compassion. Some do not feel worthy of them; others are convinced that God has abandoned them in their pain or in their best wishes to help others. We could say that there is a third group, the most ambitious and self-righteous, who aspire to receive as from now the reward for their effort and generosity. The latter are well reflected in today’s parable.

Those of us who are fortunate enough to have received the gift of faith may be among “the first” or “the rich” referred to by Christ. The problem arises when we do not take full advantage of that privilege and perhaps long for other riches, other comforts, or the good fortune of others.

There is a traditional Chinese story called The Forgetful Hua Zi. He was suffering from the illness of forgetfulness. Once he left home, he forgot his way back. He often asked: Where am I now? People would tell him: This is your home. Sometimes, he would tell his wife: You’re so pretty! What is your name? She would say: I am your wife!

Hua Zi’s wife was very worried and sad about Hua Zi’s illness. She made a promise that whoever could cure Hua Zi’s forgetfulness; she would give him half of their wealth.

A man tried all sorts of methods to cure Hua Zi and finally succeeded in curing him. However, Hua Zi became very excitable and often lost his temper. He drove his wife away from home and beat his son for no reason.

People asked him, “You’re cured but how comes that you have changed so much?” Hua Zi said, “When I could not remember a thing, I felt calm and at peace. I didn’t have a worry in my heart. But now I’ve got back my memory, my consciousness of life and death, gain and loss, joy and anger, happiness and sorrow. I cannot forget, even for a short time, these heavy burdens of life. I feel so very vexed.

That memory mentioned by Hua Zi is, above all, the memory of my efforts. This leads to a comparison with others, so that the parable Christ offers us today does not represent something that happens from time to time, but something to which our instincts continually drive us. The others are lazy, accommodated, insensitive, and do not deserve either God’s love or my love.

Some workers in the vineyard were unhappy because they remembered all too well that they started the day’s work earlier than the other workers. They thought that the late- comers did not deserve a high pay because only they ‘had toiled all day’. But, if the owner of the vineyard is so generous…perhaps he will change his plans and pay themselves quite a bit more than agreed.

When we compare our life with that of other people, an alarm light should be lit in our spirit. We can only do that to learn of their virtues, as we especially do by being permeated by the Spirit of the Gospel when we meditate on the life of Christ.

It was the conviction of many Scribes and Pharisees that only they were acceptable to God. Indeed, the workers who have been working whole daylong were the Jews; and those who came late or the eleventh hour were the sinners and Gentiles.

But we must bear in mind that the essential here is not a problem of jealousy, but one of demanding recognition and some form of payment for our efforts. And besides, we want to receive that payment, that appreciation now, as soon as possible.

We forget that God loves us more than we love ourselves and that He knows us better than we know ourselves. St. Augustin made famous remark: Deus est intimior intimo meo. (God is closer to us than we are to our faculties and our senses).

God knows our whole life and the needs of the mankind. He understands our past and foresees our future. With Him overseeing everything in the universe, we can be sure that only He knows what is best for us.

It is important that we observe the urgency and the eagerness of the landowner to conclude the work as soon as possible. If the harvest was not ingathered before the rains broke, then it was ruined; and so to get the harvest in was a frantic race against time. Any worker was welcome, even if he could give only an hour to the work.

In fact, he comes out four more times searching for workers: at mid-morning, midday, at three in the afternoon and when he calls the last group it was already an hour before the end of the workday. Yes; our heavenly Father puts all the means in place to carry out his plans. Most especially, he sends his Son and the Holy Spirit to guide us to his house, our house.

The dialogue between God and man is established only where there is an unconditional reciprocal love. Who loves claims nothing and expects nothing but to see the loved one smile and rejoice. That love is manifested and experienced when we realize and accept that God shares his aspiration with us.

It is a love very different from ours. Indeed, the first reading tells us that our thoughts are not His thoughts; our ways are not His ways. His justice is a justice tempered by love. In today’s parable we see that He does not work on the merit system. His love is unconditional. He does not love us only because we have done something for Him. God does not make use of us for Himself or His happiness. He invites us to be part of his project and his plan of salvation through our actions, which, although small and not very relevant, are really unique and of a value that only he can give them when he uses them as a testimony of his presence and his tenderness.

Furthermore, we must realize that for those of us who are already in the kingdom, we should be more than happy that others join us no matter how late they are. Loving and being with God and working hard in His kingdom is itself the reward already. We should be truly grateful that we have the privilege of entering the kingdom before not as a result of what we have done but due to the grace of God. This consideration should make us humble and grateful. This should make us generous and compassionate with those who have not found Christ in their lives.

You and I have received the great privilege of coming into the Christian fellowship very early, right at the beginning. In later days’ others will come in. You must not claim a special honor, the real pay we receive is a personal relationship with Jesus Christ.

The men in the parable who were standing in the market-place were hired laborers; they were the lowest class of workers, and life for them was always desperately precarious. Slaves and servants were regarded as being at least to some extent attached to the family; they were within the group; their fortunes would vary with the fortunes of the family, but they would never be in any imminent danger of starvation in normal times.

It was very different with the hired day-laborers. They were entirely at the mercy of chance employment; they were always living on the semi-starvation line. If they were unemployed for one day, the children would go hungry at home, for no man ever saved much out of a daily wage. With them, to be unemployed for a day was disaster. In many countries, rich and poor, you see these situations today; it is not something of the past.

Very much like the men who stood in the market-place, many people are waiting for a mission that will give meaning to their lives. And the fact that some of them stood on until even five o’clock in the evening is the proof of how desperately they wanted it.

Perhaps some of them hate the Church, others have been victims of the scandal of the Catholics, others have never heard of God or have never received a testimony from a true apostle…. In any case, the truth is that no one has hired them yet, no one has responded to their need, to the deepest aspiration of every human being, which is to be able to give one’s life for someone in a joyful and complete way.

We have been blessed in being are the servants who came first in the vineyard of the Lord. We surely have also struggled. But we have especially enjoyed since morning the presence of the Lord. We have been blessed to be workers of the harvest. But we have especially enjoyed the presence of the Lord and his comfort when things are not going well, when we lack light. We know that He knows what to do with those painful moments and that surely everything will be for the fulfillment of His predestination for us. That comfort is not available to many of our fellow men.

Our victory means giving up everything we have. Our few or many talents, all our moments, our thoughts and desires. This is how St. Paul expresses himself in the Second Reading: For to me, living is for Christ and dying is even better. We should remember that Paul wrote the letter from Ephesus at a difficult time. He was, in fact, in prison because of the Gospel. In prison, he begun to feel fatigue and the weight of years. But despite the illness, the burden of the years and the prison, he knew he could help those whom God had entrusted to him.

What we are today is not a result of what we have done but is due to the grace of God. This consideration should make us humble and grateful. When we think of God’s gratuitous love for us, this should make us generous and compassionate with others by helping them to find God and serve Him as well in love. We should be grateful that God has called us, or else like many people, we would still be sitting in the marketplace living an aimless and purposeless life. This can be a good starting point (and a reason to persevere) in all our apostolic endeavors.

Christ is not today simply encouraging us not to complain. The following story from the Middle Ages represents well the mystical content of today’s parable. The breath of the Holy Spirit (Spiration) gives us a continuous peace (Beatitude) that allows us not to lose sight of the direction (Aspiration) of our existence, in the midst of any difficulty:

A poet passed by some work being conducted and saw three workers busy at their work; they were stone cutters. He turned to the first and said: What are you doing, my friend? This man, quite indifferently and with a tired gesture, replied: I am cutting a stone. He went a little further, saw the second and posed to him the same question, and this man replied, surprised: I am involved in the building of a column. A bit further ahead, the pilgrim saw the third and to this man also he put the same question; the response, full of enthusiasm, was: I am building a cathedral.