The Supreme Expression of Christ’s Victory 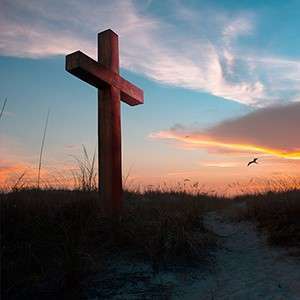 by f. Luis CASASUS, General Superior of the men’s branch of the Idente missionaries

What is glory? In today’s Gospel we read: Father, the hour has come. Give glory to your son. For some of us, glory means good reputation, or the glow or light that appears around the head of a holy person or saint, like a halo. But here Jesus is speaking in full awareness of His imminent atoning death.

So it seems important to clarify the meaning of “glory”, because it appears many times in the Bible and, according to the words of Jesus, it seems to be relevant in our spiritual life.

Our Father Founder, Fernando Rielo, gives a concise definition of glory when it refers to Jesus: Glory is much more than victory; it is the supreme form of expressing the victory of Christ (FEB 3, 1979). This is nothing abstract. I would like to illustrate it with a sports story.

During the mile race at the 1956 Australian Championships, the runner John Landy was running in third when the second place runner, Ron Clarke, fell to the track. Landy stopped and checked to see if Clarke was badly hurt, Clarke said that he was fine and took off after the other runners. Although he had lost 7 seconds, Landy began to sprint in pursuit of the leaders, he sprinted past the leader to win the race by 12 yards.

It was Landy’s greatest triumph, even though it was not his fastest time, and he was a hero on that day to every person who saw the race. Winning that race was a less important triumph than his sportsmanship gesture that made history. More than any conventional victory, that was his glory.

Even in this world of sport, we understand that glory is the supreme expression of victory. If winning is all that matters in sports, then athletes and teams would constantly seek out inferior opponents in order to increase the probability of victory. They do not do this, and victories over vastly inferior opponents are often seen to be hollow. True glory is victory over the strongest adversaries.

But there’s more. Glory is not an individual achievement. When Jesus asks to be glorified, He is ready for the glory of the cross, because He knows that in that way the victory of his heavenly Father will be supremely manifested. This is why He says: Give glory to your son, so that your son may glorify you. Not only is Christ glorified in his atoning work, but God is glorified in him. The Son’s atoning sacrifice glorifies the Father. It is exactly in this way that our Founder understands what glory is:

Because, in the end, the spiritual life can be summed up in something as simple as: “My God, I glorify You, and You glorify me”. It is a mutual glorification: “Your glory is my glory, and my glory is your glory” (FEB 3, 1979).

The glory lies in making visible God’s love. When Jesus journeys towards his passion and death, and delivers himself into the hands of the executioners and is nailed to the cross, the glory of God is manifested.

He made it clear in what consists his glory: The hour has come for the Son of Man to be glorified … unless the grain of wheat falls to the earth and dies, it remains alone; but if it dies, it will produce much fruit (Jn 12: 23-24). The glory that awaits him is the moment when giving his life, he will reveal to the world how great God’s love for man is. This is the only glory he also promises to his disciples.

Jesus also expects to be glorified and asks for this glory. But the glorious day that he expected is not the one in which, mounting a donkey, he receives applause at his entrance into the holy city, but that of Calvary. There, lifted up on the cross, he is finally able to show how far the immense love of the Father to man reaches.

Psalm 19 says: The heavens declare the glory of God; the skies proclaim the work of his hands. Day after day they pour forth speech; night after night they display knowledge. Likewise, in the atonement God manifests His glory in a way that we can understand because, like the creation we see and enjoy, His salvation is something that touches us in a direct and intimate way. Already in becoming man, Jesus began a new stage of glorification of the Father: And the Word became flesh and dwelt among us, and we have seen his glory, glory as of the only Son from the Father, full of grace and truth (Jn 1:14).

God is glorified when he deploys his force and performs deeds of salvation, when he shows his love for people. In the Old Testament, his glory was manifested when he freed his people from slavery. My people will see his glory because God comes to save them (Is 35:2,4).

If we agree that true glory is the supreme expression of Christ’s victory, then we can understand what is the difference and the borderline with the glory of this world. Human beings are glory-oriented creatures. Animals are notWe are attracted to glorious things, whether it’s an exciting drama or sports game or an enthralling piece of music. Animals live by instinct and exist to survive. We live with a glory hardwiring and chase bigger and better things.

We cannot help it. Even people who appear to be or claim to be more modest and humble, dream of some form of glory, of brilliance. We are made to live and show perfection, some form of perfection, to ourselves and to others. Those of us who have the grace of having received the faith have the double opportunity of not being perfectionists…and of not falling into the longing and attachment to fame.

Surely it will help us to remember that the “glory” of this world often leads to perfectionism, not because it is a perversion, but because it is not God-centered and therefore it is easy to fall into morally and emotionally and spiritually unhealthy states.

For this world glorification is the achievement of the approval and the praise of people. It is equivalent to fame, obtained by whoever reaches a prestigious position. All desire it, crave for and fight for it and that is why we turn away from God.

This has only one solution and one alternative: that the motive and objective of our search for perfection and glory be centered on God the Father. This is how our Father and Founder states it in his book The Heart of the Father:

I am going to use the word motivation. And I ask you: what is the reason for your actions? With what invocation do you adorn and enrich your actions? Ah, if only you were to do everything with the word Father…!

As our President told us in a course at the Menéndez Pelayo International University: God is “the guarantor who feeds man’s constitutive aspiration to be more”(JUL 21, 2014).

Glory is man’s ultimate vocation, who must daily follow the way of the cross in the certainty that Christ preceded us and has overcome the world. The motto Ad Majorem Dei Gloriam (To the Greater Honor and Glory of God) given by St. Ignatius to the members of the Society of Jesus embodies that motivation: all of our actions should continue to glorify God.

In the spirituality of St. Ignatius of Loyola, one sees in addition to A.M.D.G. the word magis for these two concepts are intimately connected. Magis is Latin for more. It is implied in the word, majorem, greater. St. Ignatius exhorts his to always “choose and desire” the strategic option that is more conducive to the will of God. Magis is a philosophy and a motivating force.

What is our experience of glory? Glory is not a thing; an object we can hold in our hands. It is a process, a history, a progress in the manifestation of Christ’s victory, which is our victory. In our mystical life, that is, in our intimate relationship with the divine persons, a clear manifestation of glory, of our participation in the divine glory, are the gifts of the Holy Spirit. Indeed, we perceive them as increments of the virtues of Faith, Hope and Charity, as a further step towards fulfillment. As Saint Paul puts it: The Lord’s Spirit makes us more and more like our glorious Lord (2Cor 3: 18).

Perhaps the most intimate and frequent manifestation of divine glory in each of us is when we experience forgiveness. It is something paradoxical, because our sin, our mediocrity is an occasion for God’s love to be manifested unconditionally. We all have an experience of this. Sometimes, for receiving someone’s forgiveness when we feel we are not worthy of it. Other times, we feel that it is directly God who forgives us. And divine forgiveness we know means a new, unexpected way of having us at his side. That is why we repeat the words of the Centurion before uniting ourselves to Christ in the Eucharist: Lord, I am not worthy that you should enter under my roof, but only say the word and my soul shall be healed.

Yes. With forgiveness, the strongest enemies are defeated: our pride, our fear, our loneliness. Even today I remember with affection and emotion the occasions when I was forgiven as a child and adolescent by my parents, my friends, my teachers… and no doubt by God himself, who called me to serve him despite my mediocrity.

St. Stephen (Acts 7) gives us a precise insight to the glory of God. He preached to the Sanhedrin Council and they became furious as he challenged their traditions. As they began to throw stones at him, he gazed into heaven and saw the glory of God and Jesus standing at the right hand of God. Then he said: I see the heavens opened and the Son of Man standing at the right hand of God. Prior to Stephen’s death, Jesus allowed him to see his glory standing next to the glory of his Father to keep hope in the church. The witnesses to the martyrdom of St. Stephen could also see the glory of God, for the martyr’s forgiveness and peace… were not of this world.

To manifest the glory of God entails making the name of God known. And this is the reason for our apostolic life, over and above seeking out proselytes and planning activities, which are two very necessary things. For this is what Jesus did. He said: Father I have made your name known. It is not sufficient to glorify God in our lives; we are also called to glorify God by proclaiming His name. Unless we make His name known, people will not know that the glory that is manifested in and through us is from God.

Many people might live a good life but are not grateful to God because they do not recognize that their goodness comes from a source beyond themselves whom we call the God and Father of our Lord Jesus Christ. Thus, they only glorify God unconsciously in their lives but do not know whom to thank for the life of God that they shared.

But if they were to come to know who God is and their purpose in life, they will be able to consciously turn to God and glorify Him more than ever. Hence, it is necessary that we are all called to praise God both in our deeds and in our words so that the whole world comes to know God and praise Him consciously in their lives.

We can then summarize our apostolic mission with these words from the New Testament: To bring many sons and daughters to glory (Heb. 2:10). What is glory if not the realization of each believer coming to the measure of the stature which belongs to the fullness of Christ (Eph. 4:13)?